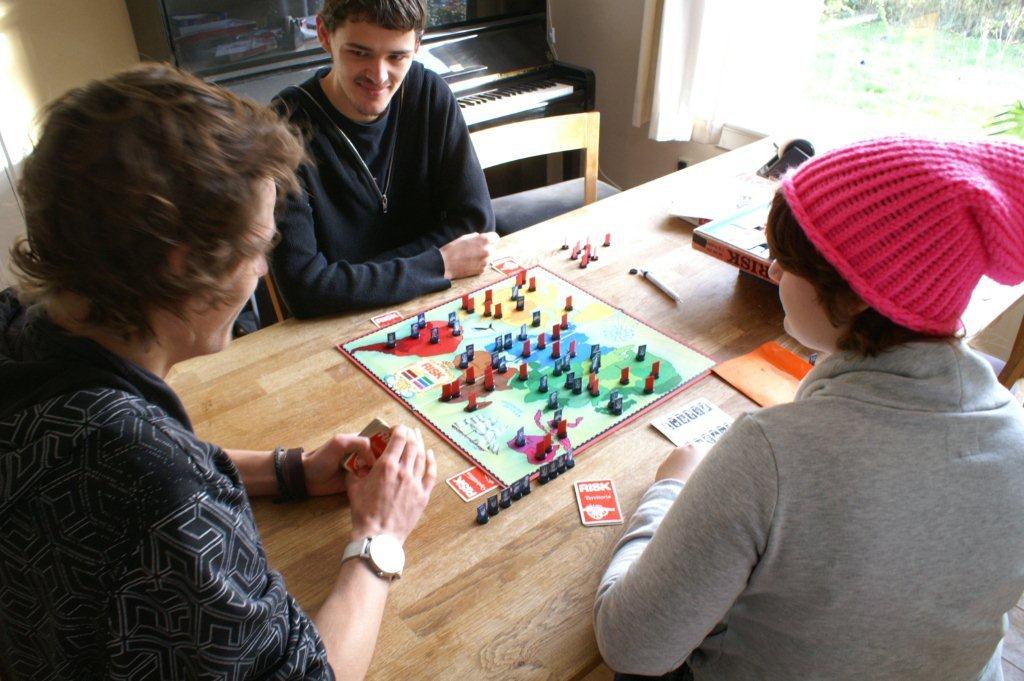 I wanted to play a game of Risk with my brother, but he complained that Risk involves too much luck. Sometimes a single unit would successfully defend against a large army.

I came up with the idea of using Stratego pieces, and after some testing, this are the rules we came up with.

Start of the game

The flag is not used. Only missions about conquering continents are used.

We tried several value systems, but they where much to tedious to be fun. Place as many units as you want.

I found it works well to hold back the spy, a few bombs and some miners. These can then be placed to stop strong units or find mines.

A turn follows the normal Risk order. Place units according to controlled continents, attack or place floor(territories / 3) units, make up to 7 moves, and possibly take a territory card.

Attacking happens by picking a unit of one of your countries with 2 or more units on it, and a unit in a neighbouring hostile country. The unit with the lowest rank is removed from the game.

If the country is taken, any number of units may be moved to it.

In case of equal ranks the defendant wins.

We tried some other rules, but found that most would make the game very slow(move one unit), the marshal too powerful(allow empty territory), or bombs to overpowered(defendant picks unit).

This works the same as in Risk, but units cost their rank to place. This makes it cheap to scout and expensive to revive the marshal.

For this purpose the bomb has a rank of 5 and the scout and spy switch costs, making the common scout cheaper than the special spy.

The game ends when a player has completed his mission.

Remember to remove missions that don’t make sense with 2 players.

Yes, the game is not 100% deterministic, depending how you look at it.

This randomness is in the dealing of the mission and territory cards and the fact that you can’t see the opponents units. You can theorise though.

However, given a starting position, it would be possible for 2 computer players to always arrive at the same end-game.