Where to dig in The Nether

You remember my other Minecraft post? A lot happened since then. Victor Engmark took my hack and made a nice tool out of it that runs way faster as well! Notch released the Halloween update with a new world that is at the moment called The Nether. And last but not least, I ported Mian to Clojure to form Clomian, to compare it to the Python version and to analyze The Nether.
There are still some issues with the code, and I might actually have found my first bug that is actually in Clojure and not in my code. Therefore I will talk and compare in another post, and for now just show you the results.
The bug:
The graphs: 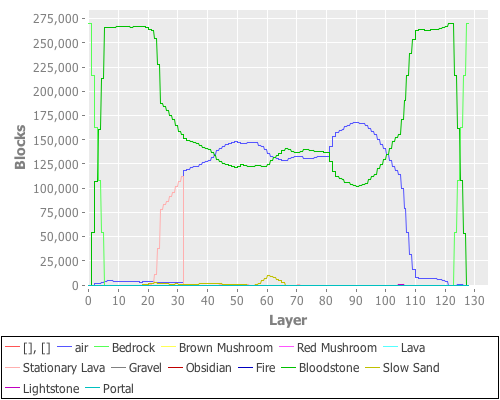 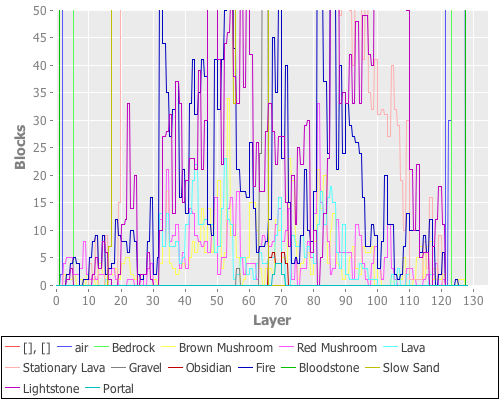 As you can see The Nether is an unfriendly place with nothing but Bloodstone, Lava, Fire and Mushrooms.
Unlike the normal world, The Nether is 100% enclosed by Bedrock and in the middle, half of everything is still Bloodstone.
Unlike the normal world, there aren't any minerals and there isn't a clear distinction between above and below.
The only valuables I see are mushrooms and Lightstone, and these are somewhat uncommon and scattered across the whole level.
Conclusion:
The Nether is an interesting world, but it's not worth getting killed for, unless you desperately need any of those special blocks or shrooms.
Pepijn de Vos
02 November 2010
clojure minecraft thenether